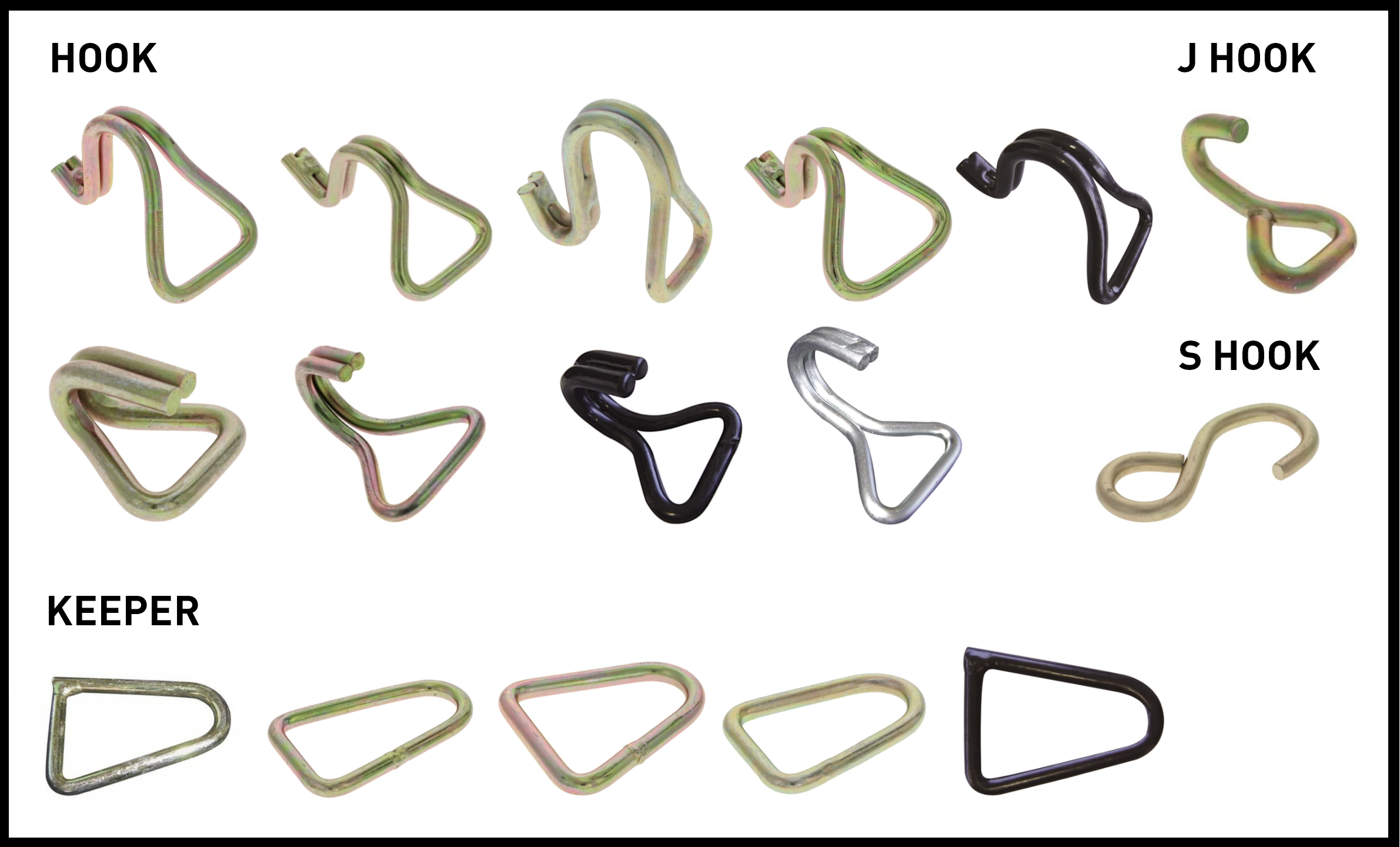 There are multiple options for both hooks and fittings that can be attached to the end of a strap assembly. Each one serves a specific purpose and can be applied to many situations.
The overall rating of a complete Strap Assembly relies on the component with the lowest Lashing Capacity. Take, for example, a 50mm Strap with an S Hook. The strap may be 2500kg L/C but the Hook is only rated at 550kg L/C. Therefore, the rating of the entire assembly can only be rated at 550kg Lashing Capacity.

Hook & Keeper
When using both the Hook & Keeper together as one single unit the items combined Lashing Capacity is much higher than simply using the individual item. For example, when only using a 50mm Hook, the L/C is roughly half of the capacity as it is if using them together. 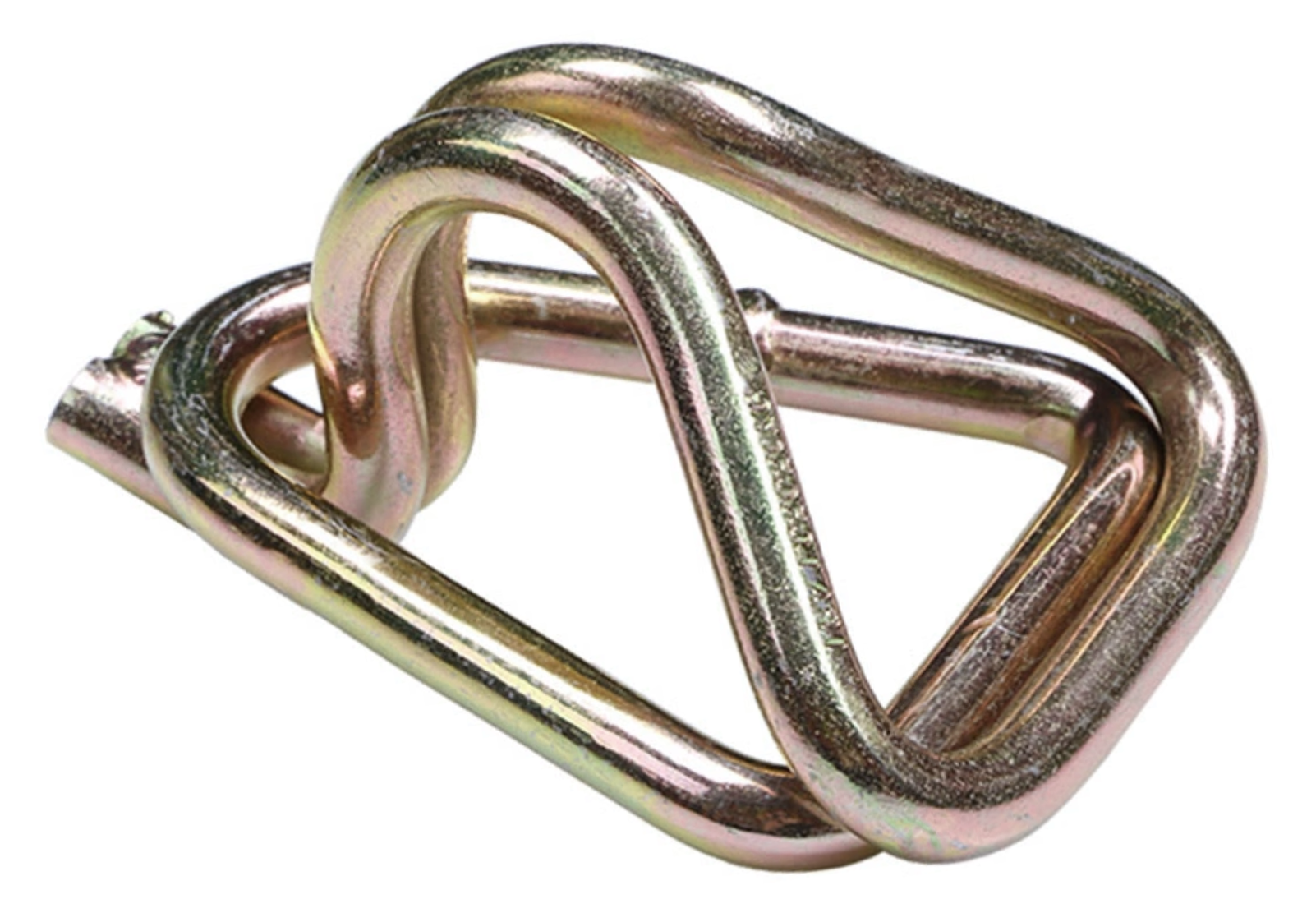 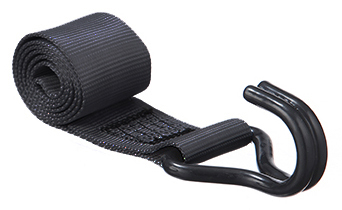 Single Hook & S Hook
Single hooks are used when it is not suitable or necessary to have a high Lashing Capacity. Generally, single hooks have a low to mid range L/C. Single hooks can be used on Overcentre Buckle Assemblies that tie the tautliner curtain down onto the truck to stop it from blowing in the wind. 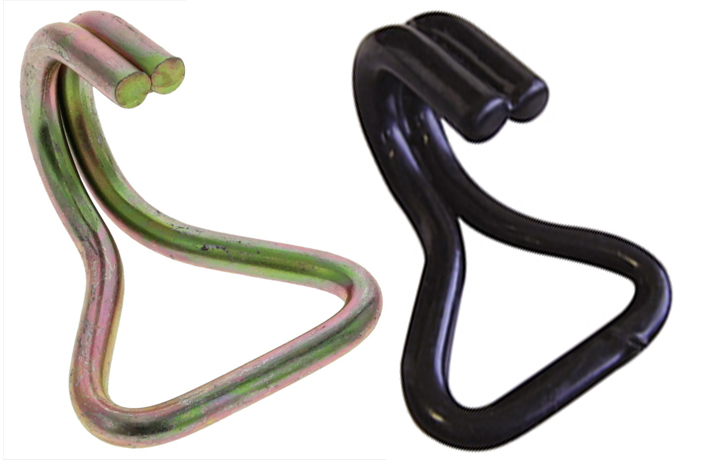 Single hooks can also be used for domestic usage when there is no real requirement from a large Lashing Capacity. A good example where the Lashing Capacity doesn’t need to be high would be tying down a fridge to take to the tip. While the fridge may be heavy to lift, it realistically only weighs around 100kg and therefore you wouldn’t require an assembly with a Hook & Keeper. 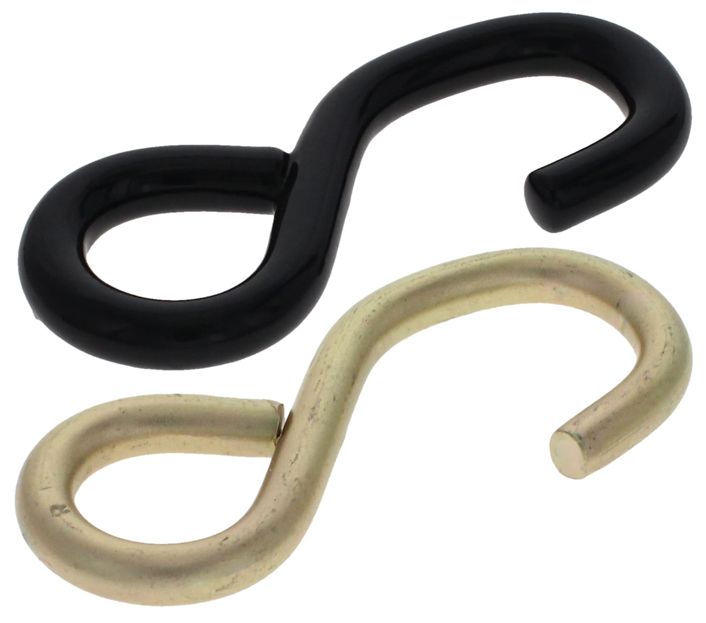 S Hooks come in both Gold Passivated or Vinyl Coated.
These are good for use in utes and where there are lashing rings in the floor of a trailer. They generally don’t fit a truck tie rail and they only have a 750kg L/C. 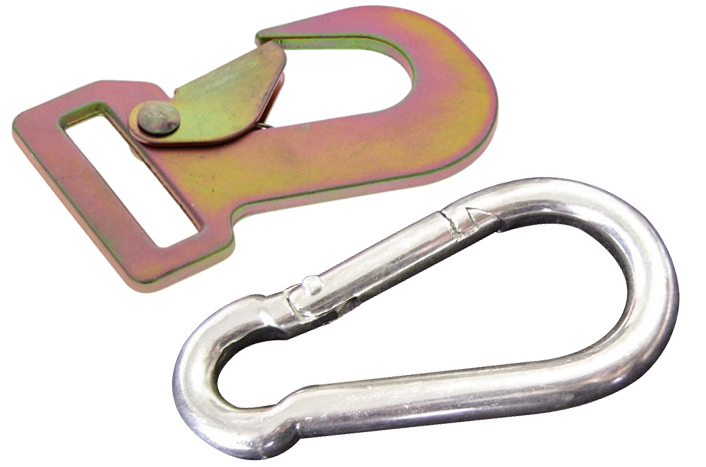 Snap Hooks
Snap Hooks are a SAFETY style hook with a spring loaded gate that shuts and locks onto a tie rail or lashing ring. The gate needs to be  physically opened to release the hook from it’s position. Snap Hooks come in a variety of sizes and Lashing Capacities and include Carabiner style latches.

Flat Hooks & Rave Hooks
Flat Hooks have many uses. They can be used where a conventional style hook cannot achieve a proper purchase like on the combing rail of a trailer. They are very effective when used in an Overcentre Buckle Assembly or over a wheel arch or tool box. As there is no place for a conventional hook to hook onto, the flat hook can be attached to the combing rail.

Flat Hooks are very useful in a situation where the assembly has to be attached to a lip of some sort. They are also used extensively in the gas bottle industry to attach to a fixed point. The assembly is wrapped around upright gas bottles and then attached to another fixed point. This alleviates the requirement of trying to get a hook & keeper together and keeping them together while attaching the other side.

Rave Hooks serve a similar purpose as flat hooks. They are designed to attach to the combing rail of a trailer. Mostly used with an Overcentre Buckle Assembly, similarly to a flat hook, they are used when a conventional hook can’t get purchase on the combing rail. 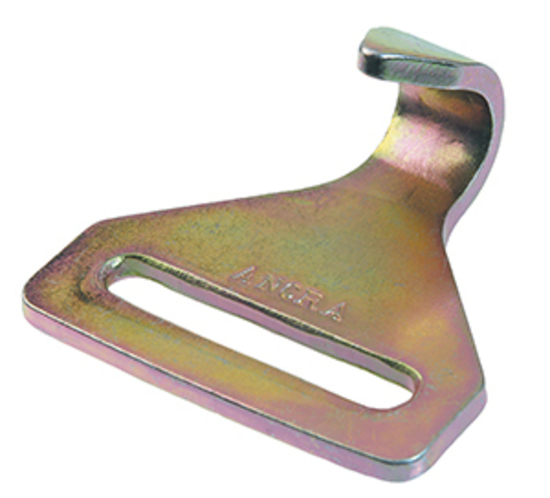 Various other Hooks & Fittings can be attached to the end of an assembly for the purpose of restraint. Some work with particular track types or can be used as an anchor point.
F Track Fittings are used when F Track is mounted in either the wall or floor of a trailer. F Track is the track that has the round hole with a keyhole type cut out. The fittings that go into F Track are generally inserted then twisted to lock in place. There are 2 main fittings used for F Track. The F Track Hook and the F Track Fittings.
The F Track Hook is simply a hook designed to be shallow enough to fit into the F Track hole without touching the wall or floor the track is mounted to.
As it just hooks in, it is easily mounted and dismounted.
F Track Fittings are designed to lock into the F Track hole by using the keyhole cut out in the hole and then twisting into place. This securely locks the assembly into place. There are 2 types of these fittings. 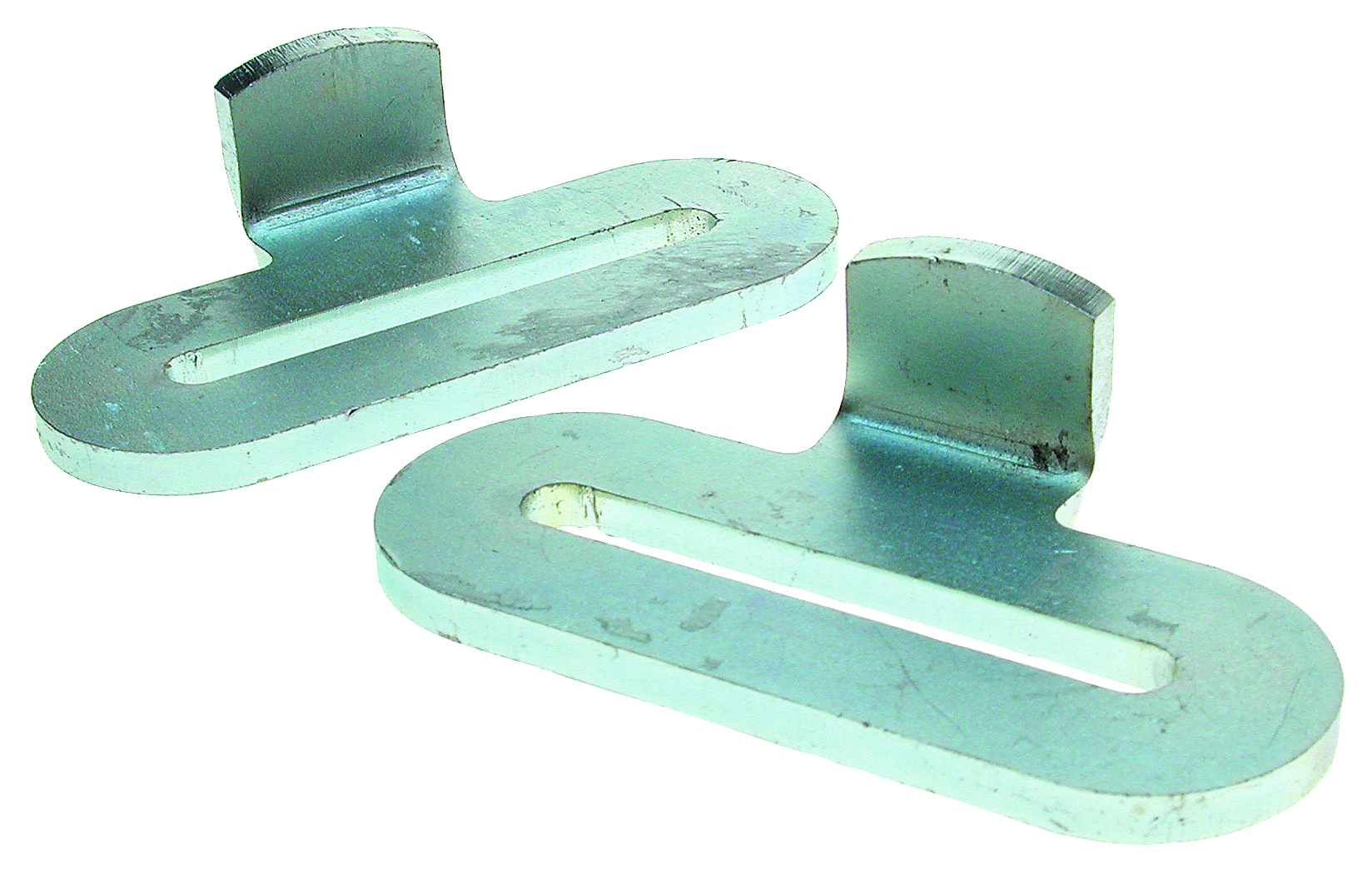 • The F Track Fittings can be used as a single unit but more commonly a pair.

• The Butterfly Clip comes as a pair of clips.

E Track is another common form of track used in the trucking industry.

The Ancra Cargo version of E Track is actually a combination track as it has the F Track hole in the centre of it’s elongated E hole. This allows the use of Shoring Bars (Pogo Sticks) as well as E Series Decking Beams and E Track Strap assemblies. E Track Fittings are a spring loaded fitting for easily mounting and dismounting the fitting. This locks the assembly securely in place and rarely falls out accidentally. 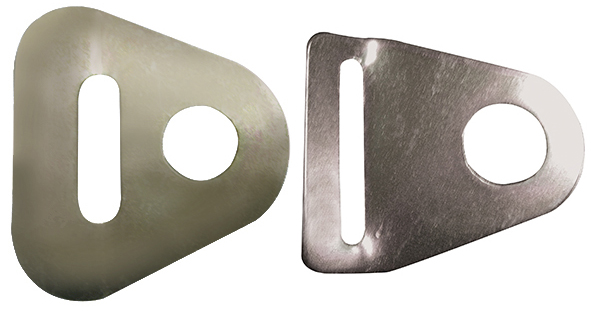 Anchor Plates are used to mount an assembly in place by either screwing or bolting them in place. They are used when an assembly is required to be fixed in a certain position.Webbing is fed through the slotted opening and then to the rest of the assembly. 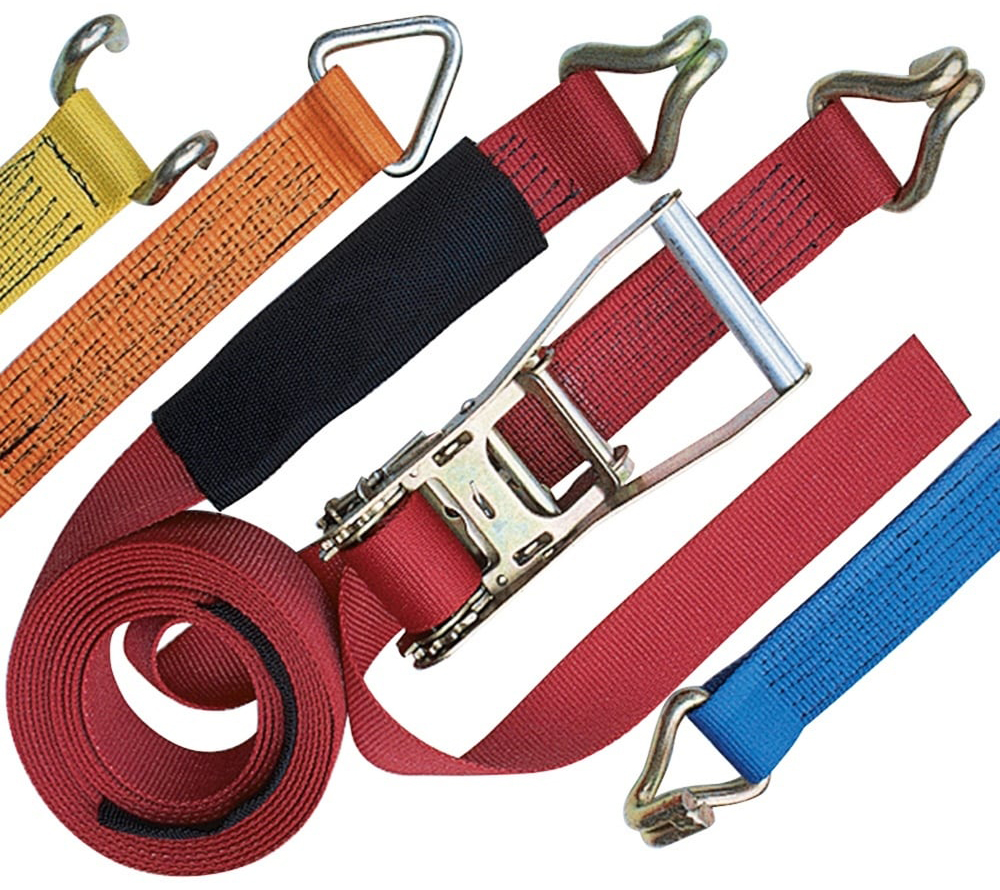 Remembering that the Lashing Capacity of any assembly is reliant on it’s weakest component. Just because the webbing might be rated to 2500kg, what rating are the components in that assembly rated at?

We ship the same business day*

We use SSL with 265 bit encryption

Over 40 years in business

×
Ask the experts at ANC Distribution. We will follow up
with you via email within 24-48 hours.
Please answer the following questionnaire
to top